Their swords are now behind museum glass, but the samurai spirit lives on in movies, books, and sites dotted around Kyoto. Meiji Restoration author Romulous Hillsborough shares his Kyoto must-see spots…

The turbulent times of Japan’s Meiji restoration have been the focus of Romulous Hillsborough’s work for many years. His 1999 book Ryoma – Life of a Renaissance Samurai was hailed by former Japanese Prime Minister Keizo Obuchi as “A magnificent book and painstaking achievement”. Last month, the US writer released a new book on the subject called Samurai Revolution – The Dawn of Modern Japan Seen Through the Eyes of the Shogun’s Last Samurai. KS asked Hillsborough which sites in Kyoto he personally recommends as must-see places for anyone interested in the era of Sakamoto Ryoma, Katsu Kaishu, Shogun Yoshinobu and the feared Wolves of Mibu Shinsengumi! Here are his choices.

A castle of the shogun during the Edo Period. On the 13th day of the Tenth Month of Keio 3 (1867), the last shogun, Tokugawa Yoshinobu, summoned senior officials of 40 feudal domains to the Grand Hall of Nijo Castle, where he announced his intent to abdicate and restore political power to the Imperial Court.

One of the 17 Historic Monuments of Ancient Kyoto, Nijo Castle is also an UNESCO World Heritage Site. A must-see part of the castle is Ninomaru Palace. city.kyoto.jp/bunshi/nijojo/english 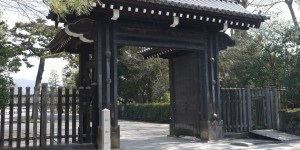 One of the so-called Nine Forbidden Gates of the Kyoto Imperial Palace, this was the site of the heaviest fighting between the Choshu-led rebels and forces of Tokugawa allies, most notably Satsuma and Aizu, during the so-called Incident at Hamaguri-gomon, on 7/19 of Genji 1 (1864). Choshu’s defeat marked the end of the Sonno-Joi (Revere the Emperor and Expel the Barbarians) movement, which thus far had divided the country for approximately 10 years. Evidence of what appear to be bullet marks can be seen on the beams of the gate.
sankan.kunaicho.go.jp/english

Excerpt from Samurai Revolution:
“As I Katsu Kaishu, commissioner of the shogun’s navy followed the Yodogawa river connecting Ōsaka and Kyōto . . . , a boat with three samurai approached from upstream. They went to the bank to land. I was very frightened. Unable to advance or retreat, I stood still and waited to see what they would do. Upon landing, two of them suddenly drew their swords and stabbed one another. The other man, who was behind them, stabbed himself through the throat while standing. I was very startled; gooseflesh covered my body—and for a moment I was unable to walk…After a while I calmed down and, realizing that Chōshū had lost, I headed back to Kōbé.”

Teradaya Inn (寺田屋)
A so-called “boat inn” along the river in Fushimi that was the site of two famous incidents: the fratricidal battle among samurai of the powerful Satsuma domain on the night of 4/23 in Bunkyu 2 (1862); and the near-fatal attack on Sakamoto Ryoma by samurai under the Fushimi Magistrate (Bakufu samurai) on 1/23 of Keio 2 (1866), on the night after Ryoma had brokered the allimportant Satsuma-Choshu Alliance at Kyoto.

Look out for katana blade marks in the wooden beams of the upstairs rooms. 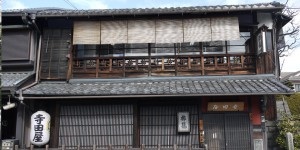 “Just then the woman I’ve told you about (her name is Ryō, and now she’s my wife), came running up to us from the kitchen and warned, ‘Look out! The enemy has suddenly attacked. Men with spears are coming up the stairs.’ I jumped up and, meaning to put on my hakama trousers, realized that I had left it in the next room. So I put on my swords, grabbed my six-shooter, and crouched down toward the back of the room. My companion Miyoshi Shinzō put on his hakama and swords—and with spear in hand, he also crouched down.” from a letter written by Ryoma to his family, reporting the event; translated by Romulus Hillsborough.

The Gravesite of Sakamoto Ryoma and Nakaoka Shintaro

The graves of Sakamoto Ryoma and Nakaoka Shintaro lay side by side in the cemetery at Ryozen Gokokuji Shrine, in Higashiyama on the east side of Kyoto. The cemetery contains the graves of numerous heroes of the Meiji Restoration, including men killed by the Shinsengumi* at Ikedaya and in the fighting at Hamaguri-gomon. It is apt that Ryoma and Nakaoka share the same gravesite—they were assassinated one month and one day after their efforts had forced the shogun to announce his intention to step down.
gokoku.or.jp/en
* The Shinsengumi (新選組 or 新撰組) (meaning the new squad) was a special police force organized by the Bakufu (military government).

Shortly before his death, Ryōma had renewed the plan he had previously shared with Kaishū to send rōnin to Ezo in the far north of Japan to settle and exploit that mineral-rich wilderness, train them in the naval sciences, and save them from dying in the revolution. He was working on the plan with Hayashi Kenzō, a Hiroshima samurai in the employ of Satsuma. In the eerily prophetic closing to a letter to Hayashi, dated 11/11, Ryōma advised him to be very careful for his life, then wrote, “Now is the time for us to act. Soon we must decide on our direction, whether it lead to pandemonium or paradise.” Early in the morning five days later, Hayashi, summoned by Ryōma from Ōsaka for “an urgent discussion” in Kyōto, encountered the aftermath of that pandemonium, with Ryōma, Hayashi wrote, “his sword drawn, lying in a pool of blood.”