My oldest son has just started a correspondence course for high school. From what I understand it follows a normal Japanese high school but he has to study by himself and attend classes once a week. As someone who advocates homeschooling I should be jumping for joy and I am happy that he can be at home more.
BUT I’m really worried about his future. He wants to be a forensic scientist which means university and joining the police force later. I worry that he won’t be able to get a place at university because this high school is basically for “drop outs”. Does anybody have any experience with this kind of school? Also what is neccesary to enter university?
I’m from England where the system is so totally different. – Jackie

Answer: It is perfectly possible to enter college after passing a high school equivalency test in either English (GED) or Japanese (Daiken?), without a high school diploma. I know two girls who dropped out of international school high schools (Yokohama IS and CAJ), passed the GED and entered Japanese Universities (Aoyama Gakuin, and Nihon Daigaku, respectively). That is a back up of your son doesn’t finish the correspondence courses. Of course, in the USA it is possible to enter many colleges with a GED or a high school diploma, even with a poor school record or a correspondence course diploma. A foreign student usually needs the TOEFL results though. The GED in English can be taken in Tokyo–where the TOEFL test is taken, I think. I don’t know about the rest of Japan. The Japanese high school equivalency test I imagine can be taken in any major city. Here is the link to an article about that test – Steve

Here’s more about how the University Entrance Examinations work (click on the document for full-sized viewing): 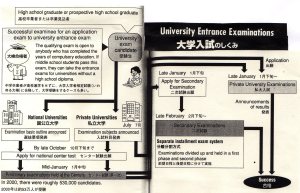 The university entrance examination system in Japan has been changing at a bewildering pace. In previous years exams were held at each university, but now a unified exam has come on the scene, held at National Centers of University Entrance Examinations–all of which poses another challenge for prospective examination students to have to handle. These National Center exams are the preliminary round of examinations for public universities, but private universities may also make use of them if they so choose. The dates for the secondary round of examinations, which are held independently at national public universities, used to be held either according to a continuous system, or the separate installment system. As of 1999, however, exams have been standardized according to the separate installment system.

Chiba National University provoked some discussion in the examinations of 1998 when it instituted an “early admission entrance system” and allowed 3 high-school students who had only completed 2 years of high-school education to enter.

The above question was submitted at our edn-in-jpn@yahoogroups.com discussion forum.