All aboard for the mystical factory tour
Yasuko Onda 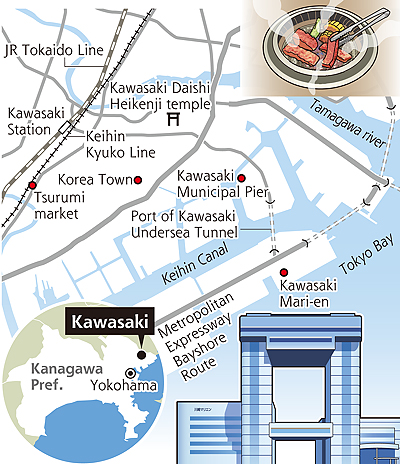 KAWASAKI–It’s 4:20 p.m. sharp. I’m about to board a bus packed with 41 other passengers in front of JR Tokyo Station. Once aboard, we’re heading down to Kawasaki, to discover the best viewing spots for seeing the area’s factories by night.

I’d wanted to take this factory viewing tour since first hearing about it two years ago. It all started when I saw the 2010 Japanese film Running on Empty. I was fascinated by a magnificent night scene in which a factory complex ablaze with lights dwarfed the film’s characters running in the foreground. To me, that scene was out of this world, although it existed in parallel to our ordinary lives.

So when I heard about the “night-at-the-factories” bus tour departing from Tokyo Station once a week, I jumped at the chance to join it.

But first, food. We fill our stomachs with yakiniku at Kawasaki’s Korea Town before reboarding the bus. We then pass through the waterfront area along Tokyo Bay before arriving at the factory complex.

Yasuyuki Kameyama, head of the Kawasaki City Tourist Association’s sightseeing promotion department, has said the idea for the tours came from a Kawasaki municipal government initiative to broaden industrial tourism.

Supported by the factories, the tours have operated regularly since spring 2010, although they were temporarily suspended due to the Great East Japan Earthquake. They are immensely popular and are almost always booked out.

Factory nightscapes first became popular following the publication of Kojo Moe (Factory Love) in 2007. Kawasaki’s waterfront houses a number of factories and over the years has reportedly been a particularly popular destination for plant viewers .

“Are you fascinated by ducting?” begins Wakai, as row of pipes in the factory district come into view.

“The scenery here is more than factory fans could ever hope for,” Wakai said. “The area is surprisingly neat and relaxing.”

This artificial aesthetic seems to be one of the reasons for the area’s popularity.

We then head to Kawasaki Mari-en, specifically its observatory on the 10th floor. The sprawling industrial zone lies before us, a myriad of lights shimmering in the night.

“These lights aren’t simply for show– they’re lit up because the factories are in operation,” Wakai said.

Indeed, this unrealistic scenery is a by-product of ordinary life.

After visiting Mari-en, the bus moves from one viewing spot to another. Among them, the view in front of the municipal pier is fantastic–the factories’ lights are reflected along in-house railway lines and smoke rising from various chimneys recedes into the shadows. Looking around, I see a flare stack, its red flames soaring high into the sky.

The scenery around me is both exotic and overwhelming.

Despite the freezing temperatures, I’m glad I signed up this tour during winter.

From that moment, time passes by in a flash. Gazing out at Haneda Airport from the bus windows, we enjoy watching the flare stacks that illuminate airplanes taking off and landing from the airport nearby. The sprawling factory complex looks like a castle of lights.

As we make our way back to Tokyo via the metropolitan expressway, we are spellbound by the factory lights snaking along the route.

At the end of the tour, our guides teach us traditional waterfront greetings. Instead of using “hi” and “bye,” workers say “Goanzen ni” (Be safe).

Human beings may have created this wonderous factory complex, but they are not infallible, and this unique greeting serves to warn workers about complacency on the job.

Our heads now filled with all this newfound knowledge, we arrive back where our afternoon journey began. It’s time to again face reality.

Only five hours had passed since I’d left Tokyo, yet it felt as if I’d taken an epic journey.