All the elements are aligned for a great viewing it seems … most importantly, your kids are on summer vacation. The next total solar eclipse that will be visible from Japan will occur 26 years from now which means either you will have to aim to live to a ripe old age to watch it or you will have to make a date to watch it with your offspring who incidentally will no longer be kids by then! (The last time the solar eclipse was watched from Japan was 46 years ago…were you around/cognizant of things then?) Below the chart shows the start-Peak-end times for the eclipse from the different regions: 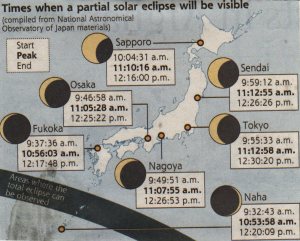 Most of us who have not booked ourselves a ferry out to Amami-Oshima island will not see a full eclipse but only a partial eclipse. Still it will be a pretty awesome sight at 75% from the Tokyo region or 90% from the Fukuoka area. If you wish to watch the full eclipse effect, please know that aside from actual national TV broadcast coverage, Live!Universe a non-profit organization will broadcast live footage of the eclipse on the Internet from four locations–Amami Oshima island, the Tokara island chain in Kagoshima Prefecture, a suburb of Shanghai and Kiribati in the Pacific Ocean — check details at www.live-eclipse .org. There is a Live broadcast of solar eclipse planned and various video images will be recorded and shown on dome-screens at science museums, planetariums and such organizations. 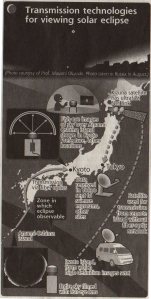 The July 22 eclipse has a lot publicity because it will be one of the longest solar eclipses of the 21st century — it will last 6 minutes 44 seconds (at the total darkness point).

How to safely enjoy the July 22 solar eclipse

According to Yomiuri Shimbun, you must take extra care not to let your children look directly at the sun since sun glare can cause blindness and the harmful infrared and UV rays will cause retinal damage to their eyes. Sunglasses do not offer good enough protection either.

According to the Yomiuri Shimbun article, filters specially designed for the purpose of looking at the sun can be purchased “from large appliance stores and elsewhere” (where is elsewhere?) but our discussion forum and children’s science teachers are telling us we need to purchase special sun-watching sunglasses from the department stores, DIY hardware-cum-furniture stores such as NAFCO. A tip off says they have been spotted “right next to the fireworks/bug catching/Summer goods”. I went out looking for them but my nearest DIY hardware store didn’t carry them, so I headed towards Ito Yokodo Department Store on a hunch, which proved fruitful … the stationary department was carrying summer science and activity kits, including astronomy kits and telescopes and such. The special eclipse glasses called “nisshoku gurasu” were found right beside the cashier in the vicinity. They were made of disposable paper frames with the required lenses and were really cheap at 398 yen only!

Beware also that your family doesn’t end up with heatstroke if you are going to be watching it through past noon until the eclipse ends.

Which leaves me to ask what’s the equivalent of Druids dancing in the moonlight in Japan … anybody???

Good websites for kids to go to for info on this coming solar eclipse are NASA’s Total Solar Eclipse of July 22 2009 page;  Wikipedia has a helpful moving map visual showing the sun moving along its path across the earth.

KNT Co. has a good website explaining in Japanese what the solar eclipse and a lot of information besides. URL: http://www.knt.co.jp/eclipse/place/place_01_00.html

View all posts by heritageofjapan